According to the Greek Myths, God Zeus bewildered the young woman Mnemosyne and slept with her for nine consecutive nights. The result of their encounter was the Nine Muses, who were similar to everything.

Μnemosyne gave the babies to Nymph Eufime and God Apollo. When they grew up they showed their tendency to the arts, taught by God Apollo himself.

They were not interested in anything of the regular human everyday life and they wanted to dedicate their lives to the Arts. Apollo brought them to the big and beautiful Mount Elikonas, where the older Temple of Zeus used to be. Ever since, the Muses supported and encouraged creation, enhancing imagination and inspiration of the artists.”

The Boyd Sisters- Pattie and Jenny, both acted as “muses” for their respective musical boyfriends/husbands/affairs. Pattie Boyd of course married George Harrison, and was part of a love triangle with Eric Clapton, and inspired such songs as Something, Wonderful Tonight, Bell Bottom Blues and Layla. Jenny Boyd married Mick Fleetwood and Ian Wallace (drummer for Don Henley and King Crimson). Jenny inspired several Fleetwood Mac songs as well as “Jennifer Juniper” by Donovan. 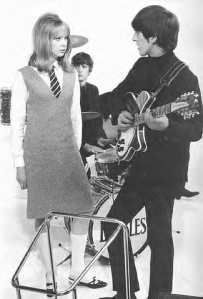 Pattie Boyd was born on March 17, 1944 (St. Patrick’s Day), in Taunton, England.  She began her career as a model early, and met her future husband George Harrison on set of A Hard Days Night where she landed a role of a school girl sitting on a pile of luggage  in the train scene of the film. George and Pattie married in 1966 and later divorced in 1977.

Jenny Boyd (Born Helen Boyd-  nicknamed Jenny by her sister Pattie) was a London model and met the future drummer of Fleetwood Mac in 1965. Mick Fleetwood recalled the beginning of their relationship in his book, My Life and Adventures in Fleetwood Mac: “I met Jenny when I was still in the Cheynes… I’d see Jenny coming home from school, a stunning 15-year-old in white stockings. I lost my heart to her immediately. I had a massive crush on her, but was so shy I couldn’t say anything to her. I knew then, at age 16, that this was the girl I was destined to marry.”

After the forming Fleetwood Mac- Jenny caused a bit of disruption with some of the other musicians in that band. Guitarists in Fleetwood Mac have been said to have the “Fleetwood Mac Curse” because strange things start to happen once a guitarist is signed up.

Fleetwood Mac has perhaps an even more curious mythology surrounding it than the Beatles.  According to “10 Unbelieveable Truths about Fleetwood Mac” article linked here, as well as several other sources (including Stevie Nicks), this “curse” has been happening since the formation of the band in the 60s:

Founding member Peter Green, who alongside Clapton is often hailed as one of the greatest blues guitarists of all time, was suffering from mental troubles before he left the band in 1970 – he also tried to persuade the rest of the band to give away all their profits to charity. A bad acid trip in Munich sent him over the edge.  [What is not really mentioned here, is that it appears the “bad acid trip” and subsequent odd behavior was from a single party in Munich- a party which several cultist aristocrats were in attendance.]

From another related article we get a bit more info, giving us a bit more insight to the bizarre reality behind this band. Full article here:
After taking large amounts of the hallucinogenic drug LSD, he [Peter Green] grew a beard, began to wear robes and a crucifix and told the band’s manager he was Jesus.
He became obsessed by the supposed immorality of them becoming rich and wanted to give the band’s earnings away. The others could not believe he was serious.
Touring Europe in March 1970, Green binged on dangerously impure LSD at a party thrown by a bunch of rich Communists in a Munich commune. Friends said he was never the same again, transforming from mildly eccentric to fully-fledged basket case. 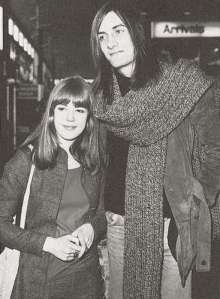 Much has been made of the ‘curse’ on Fleetwood Mac guitarists. Following Peter Green’s departure, Jeremy Spencer went awol in LA in 1971 – he was eventually located with the Children of God cult. Another guitarist, Danny Kirwan, was fired in 1972 after a drink-fueled episode which saw him bashing his head against a bathroom wall and smashing up his guitar. [More info on the strange happenings and accusations of the Children of God cult here and here– I can tell you, the accusations seem hauntingly familiar when researching this rabbit hole. It is not pretty, sometimes you just don’t wanna know.]

And the curse struck again – Mick Fleetwood’s wife Jenny Boyd (whose sister Pattie married both George Harrison and Eric Clapton) had an affair with Mac guitarist Bob Weston. He was also fired, in 1973. Mick and Jenny would divorce, remarry and divorce again.

Following this stream of misfortunes, manager Clifford Davis actually put a fake Fleetwood Mac out on the road to fulfill the real band’s tour obligations. The remaining members of the true group took lengthy legal action against him when they found out. [This I find most interesting, as it pertains to the Beatles Mysteries- Fleetwood Mac was unable to perform for a time, and rather than cancel its’ touring obligations, Davis decided instead to hire look alikes to take their place on stage! hmmm]

I find the Fleetwood Mac story interesting because it parallels a bit with my pursuit of the Beatles Mysteries as well.  Not only does the story cross over between family members (the Boyd sisters), and the use of doubles on tour,  but the tales of sex-cults and strange proclamations of being Jesus we have seen within the Beatles legacy.  Not to mention the shifting from London to the LA/Laurel Canyon area… but that’s just another part of this much larger picture.

Both girls (Jenny and Pattie) were born and raised in Kenya, where their father was stationed with the RAF.  Their father Lieutenant John “Jock” Boyd, is just the most recent of a long line of Military men. In fact, the Boyd family ancestry is filled with well-accomplished Barons, Colonels, Lieutenants, CBE’s, and politicians.  We should be used to this by now- shouldn’t we? While researching the Boyd family line, I came across some interesting information. Pattie and Jenny’s family ancestry is as follows:  Source

When trying to track down information about Colonel Stewart, I came to a dead end. He is not listed as an official governor of the Bahamas on Wikipedia (who lists them all out by date and rank so nicely). Curious in itself, being a Governor would certainly have official records of it being so… or so you would think.

The House of Stewart of course is Scottish Royalty- and according to Geni.com, the Stewart name has a long history assisting the British Crown and given exclusive power over several territories, as well as monarchs of the Kingdom of Scotland during the late 14th century before inheriting the kingdoms of England (including Wales) and Ireland in the 17th century.

England was divided up into many smaller areas, (after the war with Germany) each of which was governed by a newly appointed “Stewart” (Kind of like a governor) The “Stewarts” reported to the king but they WERE NOT royalty, per se. They were his ex army generals, friends, etc. that were being repaid for past loyalty. Each “Stewart” then became a very powerful person/family, ruling over his appointed area with full authority of the king. Each “Stewart” had his own army as well as his own “TARTAN and Shield” with his own colors. That’s why there is no such thing as “THE” Stewart TARTAN, but actually several, as each “STEWART” chose his own design and colors. His home/palace was called “The house of Stewart”.(Like the Governors mansion) Eventually most of the “Stewarts” family and even some of the staff and other workers became known as “Stewarts” to some degree. Keep in mind that most people did not have 1st, middle, and last names, but were usually known as joe, tom, etc. son of who-ever. That’s where the JohnSON, WilSON, etc. came from. So, many of those associated with the “Stewart” became known as Joe of the Stewart, Bill of the Stewart, etc. with the “of the” eventually getting dropped. Many “Stewarts” became very powerful in their own right and actually fought against each other over territory, more power, etc. – The Stewart family drew its claim to the throne of Scotland [and later England] through Marjorie Bruce’s marriage to Walter High Steward of Scotland. This initial historical situation had nothing to do with England or a war with Germany. It wasn’t until James IV’s marriage to Margaret Tudor [daughter of Henry VII] that the monarchy of Scotland had a claim to the throne of England. Not until James VI of Scotland succeeded Elizabeth I of England did the Stewarts gain control of the English throne. The English never stood well with a Scot on their throne, so they got a Hanoverian cousin eventually to “stand in”.

Linda McCartney designed a family tartan for the McCartneys’. Interesting little tidbit to add to the puzzle.

With this kind of possible family heritage, is it safe to assume that the Boyd sisters have a royal bloodline?  I would say yes, given the above information.

On a separate, more amusing note, going off another direction on the Boyd family line I discovered a few second cousins of the Boyd sisters.

Let me introduce to you the act you’ve known for all these years:  The “Del Rubio Triplets”

Seems as though multiples run in the family.  Pattie’s mother was also a twin. Just an anecdote here because I just find it a wee bit amusing, but according to wikipedia:

The Del Rubio triplets were born as the Boyd triplets (Edith, Elena and Mildred Boyd) on 23 August 1921 in the Panama Canal Zone. Their great-aunt was Edith Bolling Galt Wilson, the wife of United States President Woodrow Wilson. The girls grew up in the Panama Canal Zone and Washington, D.C.. Their stage name comes from the color they dyed their hair; the word “rubio” means “blonde” in Spanish.

And, as discussed in other thenumbernine blogs- we have seen that every US president (except one) can be traced back to King John of England in their family lines. King John was the “founder” of Liverpool… what a coincidence! So either way you go, you find the Boyd girls and their royal family heritage. Source

In conclusion, the family lines of these sisters are noteworthy if nothing else. Their ties to certain areas of the world raise a few eyebrows to the seasoned conspiracy minded seeker. Can I officially link them to British (or other government) Intelligence? No. But I can not rule it out either. Both girls in my opinion seem to be “placed” into their respective rock-stars lives so perfectly, and each influenced their husbands in similar ways.   Pattie “turned on” George to transcendental meditation, and seemed to have several connections in India as well as Greece and Kenya. Perhaps someday in the future we may have a clearer picture as to where these girls came from, and if they indeed were out to snag their rock star intentionally, or simply by mere coincidence.

View all posts by dizzydezy